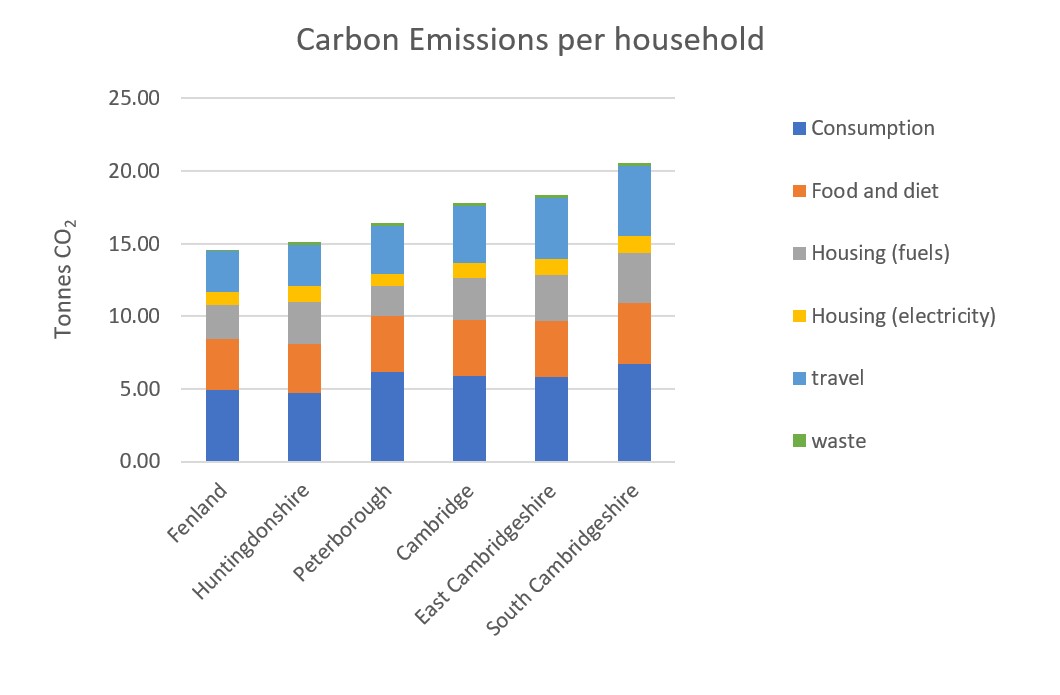 I’ve been comparing the performance of our various council areas, using the interesting Community Carbon Footprinting tool developed by the Bristol based Centre for Sustainable Energy (CSE).

This draws on more than 30 datasets, ranging from the Census to Experian’s data on household consumption, in order to estimate the greenhouse gases produced in a given area. It can provide estimates down to the level of individual wards and parishes, but I’ve been using it to compare the average carbon emissions per household from the six districts in the Cambridgeshire and Peterborough Combined Authority, comparing our choices about consumption, travel, food and diet, home heating and electricity.

Although the carbon emissions from each individual household will vary hugely, CSE estimate that, on average, South Cambridgeshire has the highest total emissions per household in the region, at just over 20 tonnes Carbon Dioxide per household. Fenland has the lowest, at just under 15 tonnes. Cambridge is in the middle.

The results reveal quite different priorities for carbon reduction in the six areas.  For example, looking at the carbon emissions for “housing” (ie for home heating and electricity), Cambridge has the lowest carbon emissions (3 tonnes/household) while South Cambs has the highest (4.5 tonnes).

This difference is largely because Cambridge homes are smaller and largely heated by gas, while many homes in South Cambs are still heated by oil.  This implies that its particularly important for South Cambs to be encouraging households to improve insulation and replace oil fired boilers with heat-pumps.  This will help protect householders from skyrocketing energy prices and could reduce the average South Cambs household’s carbon footprint by over 5%.

Cambridge residents can’t feel too smug though, because when it comes to the carbon emissions from “Consumption” both South Cambs and Cambridge both have the highest emissions at 6-7 tonnes/household, while Fenland is doing best with less than 5 tonnes.

The majority of these “consumption” based emissions are from the emissions involved in making the household goods we buy, ranging from toiletries and electronics to furnishings and vehicles.  These can be surprisingly high, so manufacturing a new car (whether eV or not) can easily be responsible for 10 tonnes of carbon emissions. This is equivalent to the emissions from driving an old petrol car around 20,000 miles, so, if you don’t drive much, its often greener to keep using an old car, rather than buy a new one.

To help reduce these emissions, simple measures would include anything that reduces the need to buy new stuff.  For example, Councils should be supporting Car Clubs, (which give pay-as-you-go access to shared low emissions cars), the proposed “Library of Things” (to borrow seldom used things) and the growing network of Cambridgeshire Repair Cafes.

As halving the amount of new stuff we buy each year typically reduces total household carbon emissions by 10%, this seems a very easy way for us all to make a difference.

When it comes to travel, although the majority of the travel related carbon emissions come from private transport, it’s noticeable that in South Cambs the average carbon emissions from flights are over twice those in Peterborough.

If our post-covid “new-normal” involves half the car travel (for example, because of more online working and less commuting) and we chose to halve our airtravel, the average South Cambs household could reduce its carbon footprint by another 10%.

Simple changes can make a big difference, particularly if Councils and others help by making those choices easier.