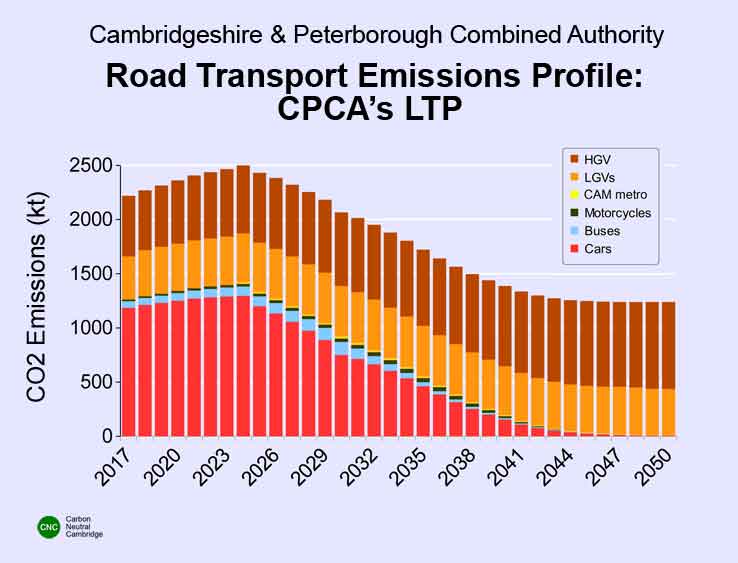 The Local Transport Plan (LTP) 2019 from the Cambridgeshire & Peterborough Combined Authority (CPCA)  is the latest in a series of LTPs for the region. Reducing congestion and improving commuting remain the focus and it pays no more than lip service to the challenge of reducing carbon dioxide (CO2) emissions from transport. Were it to do so it would recognise that all vehicles and all journey types contribute towards transport emissions. This in turn would encourage a less narrow approach than the one it has chosen.

Our analysis indicates that petrol and diesel cars currently account for 96% of CO2 emissions associated with passenger road transport in the CPCA. There needs to be a rapid modal shift away from ICE cars to active and public transport. We have developed our own scenario based partly on private cars being one third of their current number by 2030. We suggest that this could be brought about by instigating:

Such a dramatic reduction in car numbers and parked cars would free-up considerable roadspace. This would allow much more frequent bus services and a limited amount of new light rail systems to be installed. Together with a more extensive network of Greenways for active travel, these measures would negate the necessity of the CAM Metro scheme.

We are also calling on the CPCA to give much greater attention to emissions from freight. There needs to be a rapid and widespread introduction of new infrastructure such as Greenways, and urban consolidation centres.

Finally we recognise that achieving this level of change will require bold and radical action. Yet against the background of a climate emergency, isn’t this preferable to the incremental greenwash nonsense that characterises this and previous LTPs?

A complete copy of our response is available to download.