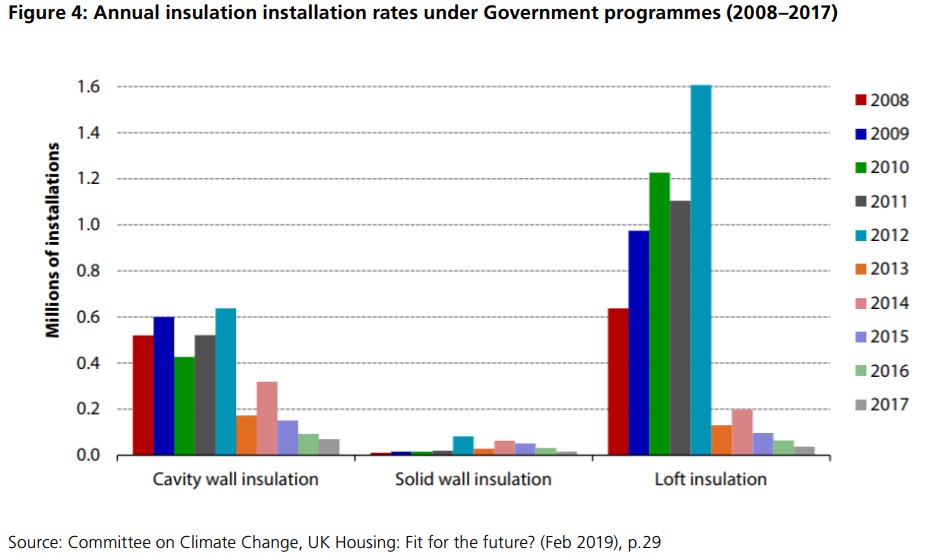 The Green Homes Grant scheme has just been launched, but will it deliver?

The government’s track record is not good.   The previous scheme, the “Green Deal”, was launched at the end of 2012 with much fanfare.  I listened with some scepticism as the minister Greg Barker claimed that it would be a world beater, but by the time the scheme was quietly closed in 2015, only 15,000 “Green Deals” had been taken up.

What’s worse, the Green Deal had a devastating effect on improvement of domestic energy efficiency.  The rate of loft insulation plummeted by 90% within a year and the rate of cavity wall insulation by 70%. Both have continued to decline since.  This is because the Green Deal replaced the previous “CERT” scheme, in which insulation was simply subsidised by energy companies. Instead there was a complicated process of loans or grants for specified measures installed only by specially registered traders. This excluded the DIYers, while the cost of registration deterred small businesses.

After a long wait for a replacement, the Green Homes Grant scheme has just been launched, nominally with £2 Billion to be given away (£1.5B to private householders, £0.5B through local councils) Appropriately it focusses primarily on improving insulation and installing low carbon heating.  It offers generous grants: 2/3rds of the cost up to £5K, or 100% of the cost up to £10K for those in receipt of many benefits.

Hopefully it will be successful, but the first catch is that the scheme only runs for 6 months, so all work has to be completed by 31 March 2021.  This is likely to be tricky, because apparently the industry warned the Government that there was no way they had the capacity to deal with £2B over just 6 months, which is clearly true. But, I am told, Sunak ignored it and went ahead anyway.

Secondly, after much initial confusion, it is clear that the grants can only be awarded for approved work that is quoted for and performed by traders who are registered with Trustmark in an appropriate category. It is indeed important to try to avoid cowboys and scammers muscling in, but the problem is that there are very few Trustmark registered traders. In late August the construction industry warned that just 0.5% of construction businesses would qualify!

You may be lucky and succeed in finding a good supplier and getting the grant, but even if you don’t, some measures such as loft insulation and cavity wall insulation are so cost effective they often pay for themselves within a few years anyway.   And of course by upgrading our homes, we make them healthier, more comfortable and help us get to Net Zero carbon emissions.

To apply for a green homes grant, we recommend you use the official government website here